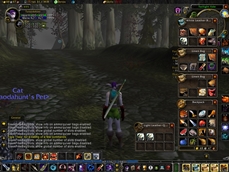 Given that the latest file I've uploaded is Ultimor's except for the WoW client version number, here's his Description also:

-What?-
Displays number of free and/or total slots per bag or globally with minimal memory and resource usage. It does not open your bags as a single or grouped bag.

-Why?-
Because Ultimor almost ripped his eyes out when he realized how much memory the original Free Bag Slots actually used.

The original by sarf (KiB usage and seconds to load):

(note: values are of course not static, and changes on every load, also depending on both system and other addons, etc.)

In summary, if you liked FreeBagSlots but don't have unlimited memory, this addon is probably for you.

-Other-
Almost forgot, thanks to Eternalight (of EU-Sunstrider) who tested random crap Ultimor sent while he didn't have an active wow-account, almost everything has been rewritten since though.

Another thank you to Darkrunner (also of EU-Sunstrider) who tested the soul bag support for Ultimor.

This addon should be compatible with any wow-client (including KR), but it's slash-commands are only available in English. Anyone who wants to send me translations is more than welcome to.

DO NOTE, however, that the ammo/quiver option probably does NOT work until proper localization strings has been entered into sfbs\localization.lua

Thanks to some coders at WowAce, I was able to get sfbs to work with Cataclysm.

I did not write any of the program for SleekFreeBagSlots (also known as FreeBagSlots and sfbs in the WoW addons folder) and do not deserve any credit for that. I am simply managing it while it is working. The credit goes to the original authors noted above who wrote this addon, and WoWAce who helped fix it.

I will gladly accept the help of any experienced addon author should a fix be needed, for which credit will be given if asked.

I messaged Ultinor and at this time he has no plans of coming back. I have not received any reply from zorched as of the date of this edit.

This update is purely to show it works with WoW 7.2.5, no coding changes otherwise.