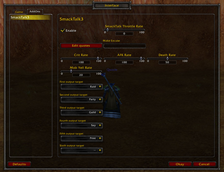 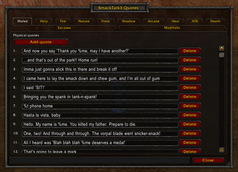 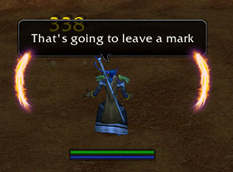 SmackTalk3 provides the ability to automatically role-play or trash talk your targets while you melt face. When you attack with melee damage or a spell (damage or heals) a random quote is selected from the list and sent to your preferred output channel.

Melee Crit: “Bringing you the spank in tank-n-spank!”

Heal Crit: “You ain’t got time to bleed”

Death: “I will have my vengeance, in this life or the next”

In game addition/modification/deletion of quotes

Handles substitution of the following variables in quotes:

Install and you’re ready to go. Configure the rates by typing /smacktalk3 or /st3 or by navigating to Options->Interface->AddOns->SmackTalk3. Update to your quotes of choice with /st3 quotes or by clicking on “Edit Quotes” in the addon config menu.

If you think you might have found a bug, just leave a comment here. If possible, list the steps to reproduce the bug or the circumstances when it occurred.

If there are any features you would like to see added please mention them in the comments. Spalmer uses this mod for Role Playing an obnoxious dwarf pirate hunter named ScurvyPete in classic. Coder_Qwade has a fire mage that loves to pun.

SmackTalk3 builds on SmackTalk2, updating it to work for the current Wow API. SmackTalk2 kept me company while grinding and farming and I hope you get the same from SmackTalk3.