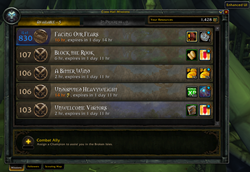 Standard Frames Enhanced is, as its name says, an enhancement over the standard UI. It's intended to fix some bugs, add some tweaks and expand some functionality provided by the standard API.

At the moment, the addon is incompatible with any UI framework such as ElvUI.

Running along addons that modify the mission list might produce undesired interactions. So far these addons are considered:

If you have any suggestion or found any bug, please fill an issue report.

Known issues at the moment are: