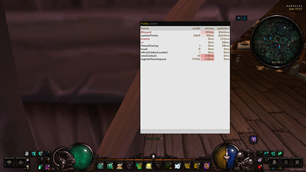 Profiler for World of Warcraft

A profiler for WoW addons that tries to go deeper.

Note: you must currently set CVar "scriptProfile" to "1" manually before using. Enter '/run SetCVar("scriptProfile", "1")' in the chatbox and reload the interface.

Find out which addons…

Shows the total CPU used and times called for all found functions in the global namespace and groups them by addon structure.

There is not much that can be done to track locals automatically, but addon authors can easily improve functionality by exposing local tables globally like so:

As an experimental feature, the Profiler can try to find out callers to functions. This is currently done with plain brute force by hooking the function, throwing an error and parsing the debugstack. As you might expect this is far too heavyweight to do automatically. The recommended approach is to do the following in your source:

There will be support for figuring out where in a function the time is spent in the future that will work much like debugging prints – there is no reasonable way to do this automatically.