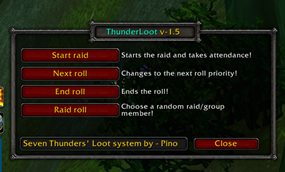 ThunderLoot is made to make it easy to keep track of loot and attendance.

Will store data in the OfficerNotes.
Needs a selected guild character to store Addon data on.
Everything should work out of the box.
Loot is grouped by ranks.

On first load of the addon, it will ask the user for who the selected guild character is, that should be used for data storage.

The database can be manually by editing the lua file located at:
"…\World of Warcraft\_classic_\WTF\Account\{accountID}\SavedVariables\ThunderLoot.lua"

Remember to close the game before editing the database!

"/tl roll ItemLink" (Starts a roll for an item)

"/tl additem ItemLink" (Adds an item to the database)

"/tl delitem ItemLink" (Removes an item from the database)

More info will be added as features is added.