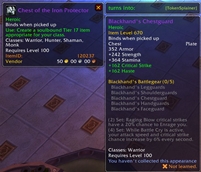 Disclaimer: This addon is a glorified plugin for Can I Mog It?, meaning if you use TokenSplainer, you should also use Can I Mog It?, as it displays whether you learned an item's appearance in a far better way than Blizzard's default interface.
It's somewhat optional when only one target item is shown, as the default Blizzard info is shown, but for cases with more than one target item, you need Can I Mog It? as TokenSplaner requests information from it. I considered duplicating Can I Mog It?'s logic to be independent, but decided against it, as Can I Mog It? is constantly updated for standard item tooltips and very useful on its own, and using their strings ensures a consistent look across tooltips.

I was inspired by Can I Mog It? to set up an addon that shows what Tier and similar tokens can be exchanged for. Just when I had started, TransmogTokens popped up, but I wasn't really satisfied with how it displayed its data, so I kept working on this. TransmogTokens may suffice your needs, this addon merely offers a different display.

For items that can be exchanged for stuff, an additional tooltip is shown, displaying either a single item, or a list of items that can be acquired. By default, only data for your current class is shown, when you hold Alt, all possible yields of the token are displayed (certain tokens are BoA)

Now with initial data for Ensembles! Beginning with the Scarlet Crusade Ensembles and the Demon Invasion Ensembles, we'll show the items and whether they're unlocked (you can also acquire individual items from the Demon Invasion sets, and there's also Ensembles for WoD PvP sets and weapons which are on the TODO list – massive data)

Since this addon's focus is Transmogrification, only tokens that yield moggable items are supported. No Amulets, Rings and Trinkets.

Oh, and the addon should support every locale automatically, most class names, armor types and roles, except certain hand-written descriptions related to specific tokens. Please let me know if you find non-English words elsewhere!