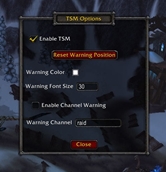 This addon is a useful tool for hunters, although usable by rogues and druids as well. Due to the patch 4.0.1 changes to Tranquilizing Shot (focus cost and cooldown removal) you can use tranquilizing shot multiple times. That isn't useful for example if you use a macro to dispell enrage from your focus target, as you won't know for sure whether it's been dispelled. This addon will notify you when your Tranquilizing Shot dispells a buff and it will also say which buff has been dispelled. Works for rogue's Shiv and druid's Soothe as well.

You can alert your fellow raiders/arena players/etc what you dispelled via chat channels. This functionality can be enabled with /commands or with the brandnew options interface in version 2.0
Added in version 2.2: If checked in options, when announcing in channels you have the option to let the addon automatically choose the channel to announce based on what type of group you are in (battleground/arena, party, raid or solo (/say)).

You can turn the functionality on and off ingame with slash commands:

New features in version 2.0:
In this version there's a brandnew Options interface where you can adjust various things of the addon and warning. You can access the options menu with:

Furthermore you can change the position of the warning on your screen with the following /commands:

After you move the message be sure to disable it so that the position gets saved. The resetting of the position can be done with both the /command and a button on the options interface.

Also a .txt document has been added to the folder in which a few macro's are listed that I recommend using in combination with this addon. 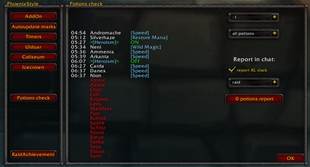