Get
Download Trilliax Scrubber (1.2.4 release) for world of warcraft version 7.1.5? 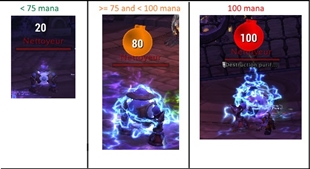 Trilliax Scrubber is a simple addon displaying the scrubbers mana on the nameplates and alert you when they reach a threshold of mana.

Important note on the installation :

Take note the dependencies are not included with the addon if you download it from "Install via Curse client" button or simply by the Curse website.

You have two solutions at this issue :

Thank to check if you have well PLoop and Scorpio in your addon folder before to say doesn't work.

By default, the addon has this behavior :

The addon is configured by default for someone having no addon of nameplate. If you are not in this case, this is important you're going to the Configuration step : change the size and postionnement of

ui elements in order to adapt correctly to your ui nameplate.

In the chatbox, type "/tsc" to open the opetions. I advise you to enable the Config Mode while doing your configuration.

The options work but still need some tuning.

This options change slighly the behavior of bomb icon. The addon will predict the mana final when a scrubber is casting, this value will be used  by the alert system. Take note the mana text isn't affected by this options, and will always show the current mana amount.

I think an example is necessary :

Imagine we take one with 75 mana, then start to cast, reach at 100 mana and to finsh, destroys itself.

Below is the behavior of alert system in function if "Predict mana" is enabled or not :

I advise you to let Predict Mana to true,  allows to alert you earlier when a scrubber is near to be destroyed.

The addon should work with all the nameplate addons. In the contrary case, thanks to let a message in the commentary with the name of your addon.