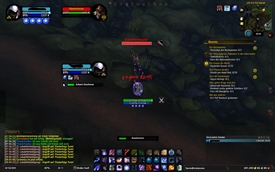 Get
Download UnitInCombat (UnitInCombat 7.2.1 release) for world of warcraft version 7.2.5 +4?

This addon shows whether an unit is in combat or not. Useful for PvP to indicate if you can sap someone out of CC.

Configuration is done via lua.file.

Works for default UI unitframes only.

In the Lua file you can control the following:

If you notice an issue or you have an idea to improve the addon feel free fo create a ticket at https://wow.curseforge.com/projects/unitincombat/issues