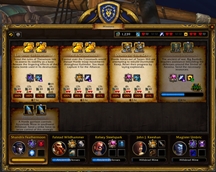 War Plan replaces the Mission Command Table interface for War Campaign missions, showing available and in-progress missions, as well as champion and troop details on one page. You can choose from groups suggested War Plan or create your own, and easily plan out groups for multiple missions.

If you experience problems, or would like to request a feature, please use the Issues tracker. You can help translate the War Plan user interface to your desired language using this localization tool.

NB: After November 30, 2020, this addon might not be updated on AddonsWoW. Please check the official site for updates and support options.