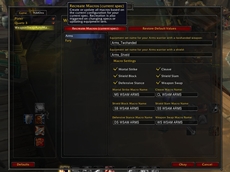 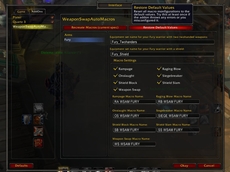 I got you covered. Here is everything you need to know in a *cough* 'short' 8 minutes video:

What does it do:
This addon will provide and update macros for you, that automatically switch between your main weapons and a loadout with shield when trying to use a skill that necessitates the switch.
The names for the weapons/shields are automatically read from designated equipment sets and will update in all macros everytime you make a change to those equipment sets. You do not need to reassign those macros to your actionbars, they stay in place.

With the Prepatch for shadowlands (9.0) Arms and Fury warriors get Shield Slam and Shield Block skills back as baseline skills again. If you want to make use of those in any combat situation, a macro is the easiest solution to equip a shield or go back to your main weapons. The same goes for Shield of the Righteous for Paladin.

Configurability:
The macros use the character-specific macro slots.
You can configure in Interface>>Addons options, from which equipment sets the data is derived and what macros you want to be maintained and how they should be named.

Known issues:
– Doesn't work or shows strange behaviour if you don't have enough character-specifc macros left available You need at least as many as you would like to create based on your configuration
– Doesn't necessarily work properly with multiple weapons of the same name, as the macros try to equip items by name. I looked into it and I really can't find a better way to do it. I could go by item Id, buit even there it is identical for the same weapon at different ilevels/enchants/slotting, so there is no way to differentiate in the macro the exact unique weapon

Compatibility:
9.0 and higher? Yes
8.3? Seems so
before 8.3? No idea
Developed the addon for my own use explicitly for shadowlands (9.0+) . I have no idea how far back it is compatible. Seems to work for 8.3, but  I don't think it would work with Classic. (Using rather modern wow api functions)

Hi there,
thanks for the amazing work, I am already in love with it.
Can I ask you whether would be possible have your UI? 😀

This addon works for my level 50 warriors but doesn’t even appear for new characters. I was wondering what level this addon becomes available in game.

can you please add ability to make a custom spec or one for SV hunters would be highly useful also, thanks

Apparently this doesn’t work if you already have macros, pretty useless.