Using Whelp, you can write persistent reviews for any players you've grouped with in the past day, and see reviews written by your friends and guildmates.

To review a player, you can open the "Reviewable Players" window by typing /whelp new or clicking the Whelp icon next to your minimap. Then, click on "Review". Alternatively, you can just right-click their party frame and select "Write a Whelp". Either way, you end up at the review-writing window. 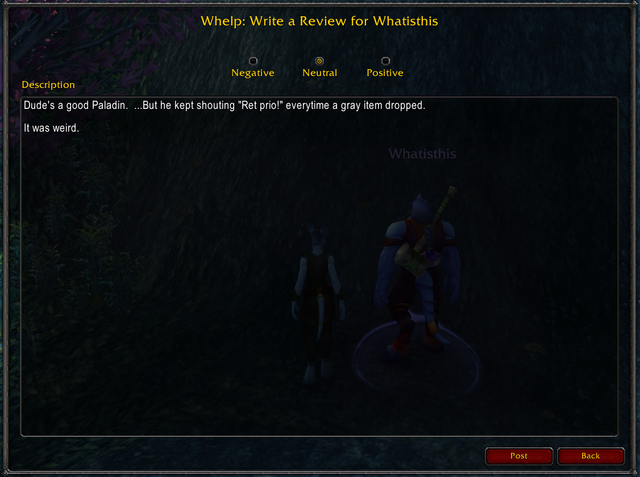 To read reviews on a player, right-click their party frame and go to "Read the Whelps" (at the bottom).

Note: You must be grouped with someone in order to view reviews written about them. This is an intentional design decision. Please engage with players about their negative reviews instead of just dismissing them for hearsay. The rationale for this decision is discussed a bit more in the "abuse" section below. 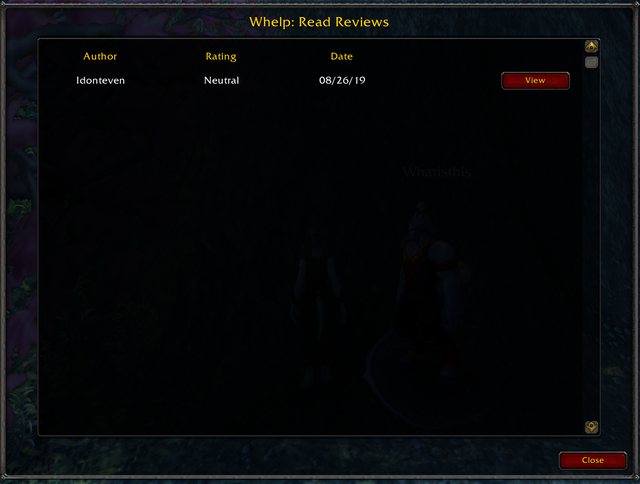 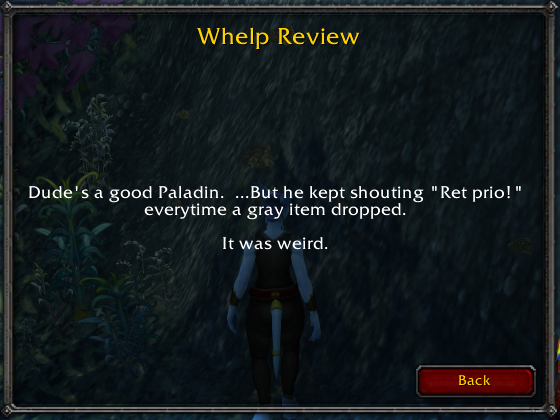 You can also tooltip over any player in your group to see a summary of their ratings. The first column is the number of positive reviews, the second: neutral, the third: negative.

Whelp will also automatically share your data with your friends and guildmates, and theirs with you, allowing you to see what a substantial network of other players have to say about their interactions with your groupmates. The data is typically synchronized about once every 30 minutes. If you want to force an immediate sync, type /whelp sync.

Whelp is technically still in beta. I kind of don't even want to release it yet, because I'm certain that it's going to break on people. But I think it's more beneficial for people to have something, and know to check in for updates later, than to have nothing at all, so… don't be surprised if it breaks. You've been warned. There will probably be a fair amount of breakage until mid-September 2019.

If you find issues, please report them in the bug tracker with the full error message and a specific list of what you did to bring about the error.

Also note that, while Whelp is functional, it is far from "complete". There are many improvements planned to Whelp, especially in terms of adding features and also making it more difficult to use Whelp abusively. Stay tuned for those improvements in the coming months.

Just about any sort of social review system can be used to harass, and Whelp is no exception. While writing Whelp, I have been very cognizant of this fact, and have intentionally tried to design it to minimize the effectiveness of abuse. What's more, there are numerous features planned to allow combating abuse (none of which involve any amount of removal of reviews after they've been posted).

This wariness of abuse is why, for example, you may only review group members and see reviews of group members. This requires the reviewer to at least engage with the reviewee a bit before judging them worthy or unworthy. I would like to relax that requirement at some point, but that will require some thought and planning and effort, on my part.

And, while new features will make things easier later, there are always things that the Whelp users can do to combat the malicious use of this system, such as the following:

This is a lazy review:

It's not constructive or informative. No one knows what went wrong or how this player could do better. He just has to "stop sucking", whatever that means.

Here's a much better review:

> He's a Rogue who Needed on a plate chest piece on the first boss and then said that it was a 'misclick'.
>
> He went AFK for 15 minutes without saying anything.
>
> Then, after we wiped for the first time on the second boss (got him down to 5%), he called us 'nubs' and hearthed out

It's pretty clear what this player did wrong and what he could do to improve his behavior and his standing with reviewers.

By giving players the power of something like Whelp, it is inevitable that some number of people will use it irresponsibly. Please strive to be better than those people, and use Whelp to honestly and accurately recognize the heroes and villains of your server community.

This addon will likely cause substantial pauses when there are thousands of entries or more. I intend to solve this in the future by allowing users to be more selective about who they're taking data from, and possibly by setting an expiry date on the data.

I don't know for certain that this will actually solve the problem. This will be an experiment, but I'm very interested in trying to find a solution that will allow for a broad corpus of data without a poor user experience. Check back in November 2019 for an update that will include attempted solutions to this problem.

Unless Whelp is monumentally more successful than any reasonable person should expect it to be, I'm not expecting it to become a problem before then. But, if I'm wrong, and it is causing you slowdowns before then, you can turn syncing off with /whelp autosync disable and then get rid of your current Whelp database by deleting ...\World of Warcraft\&lt;VERSION&gt;\WTF\Account\&lt;ACCOUNT_NUMBER&gt;\SavedVariables\Whelp.lua.

The addon is available in:

Corrections to my German and Spanish translations are very welcome.