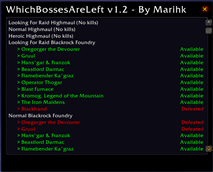 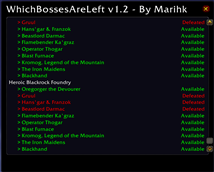 A World of Warcraft addon that shows which Legion raid bosses have not been killed this week.

"Current" at this time means Tomb of Sargeras and Antorus, the Burning Throne.

What does it do?

WhichBossesAreLeft shows which current raid bosses you have not yet killed for the week. Three difficulties are tracked: Looking For Raid, Normal, and Heroic.

This addon integrates with LibDataBroker compatible panels (such as Bazooka and Titan Panel), so you can simply mouseover the LDB icon, or click on the icon to open a moveable window. Or, you can type /whichbossesareleft to open the window.

Why would I use this?

I wrote this addon to make it easier to use the Raid Finder for normal and heroic difficulty Draenor raids, and then updated it for Legion. For example, I may have missed a guild raid night, and still need to kill one or more bosses for the week. I want to see the names of those bosses that are left alive while the raid finder window is open. You can get the same information through the default UI, but it takes several clicks to get to it, and it hides behind the raid finder window.

Based on a request, this addon will now also display which Looking For Raid difficulty bosses are available for the week.

Where can I download official releases of this addon?