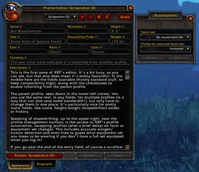 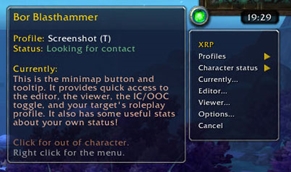 XRP is yet another roleplaying profile addon, along the lines of the venerable FlagRSP or MyRolePlay. It was written entirely from scratch, originally designed to solve some shortcomings of existing roleplay profile addons, but still interact properly with all of them.

A few uncommon features of note:

This addon is currently in maintenance mode and will only receive bugfixes in the near future. Feel free to message SolanyaStormbreaker on AddonsWoW (or Solanya#5014 on Discord) if you’re interested in taking over its development.