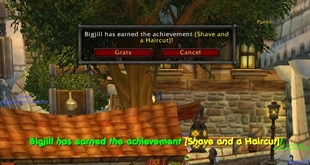 Now includes Bill's Utils as a library but it can still be installed from either of these links:

Never miss an achievement again. This addon does not auto-grats because some Achievements are just not worth a grat and it could get spammy if it did.

Achievement Sounds can play a sound and pop up a small window alerting when someone in your party / guild or near you gets an achievement. The popup will disappear in 15 (default) seconds if you don't click the "Grats" button or "Cancel" button. It can also displays the achievement in MSBT's notification frame if installed. When you click the "Grat" button it will send a "Grats" to the person that is randomly generated according to the configured settings or the default grat that can also be set in-game by you. There are MANY options that you can set and if there isn't an option for what you want let me know and I will try and add it. (If only I could find a way to send ascii chars greater than 127)

All options are defaulted on but can be changed by the slash command /achsnd or by the GUI config screen that is in with all your other addon config screens or by typing "/achsnd config"
The custom "Grats Alert" frame that can be moved and positioned wherever you like. You can also change the fade behavior of the frame, and minimum alpha, and more

Added a new command "/achsnd cmdlist" that explains what the command line switches do.
Added Nickname support for the grats. Type "/asnn" for more info (they store per server)

To use a custom sound file for the alert just copy a file named alert.mp3 or alert.ogg into the addon directory before you start WoW

Now filters out achievements from the opposite faction when you have near grats on(except for pandas).