This one takes the new sounds for rogue's pistol shot and plays it instead of the regular gunshot sound when using guns as a hunter. The two sounds are very similar except the rogue's pistol shot doesn't sound like a toy pellet gun (the rifle sound does ever since it was "updated" in WoD).

So why install this one that was made in half a minute instead of one of the other gun sound addons that were made using custom sounds? Well, my friend, those addons make the guns in WoW sound more like modern or WWII era guns, since those are typically the type of guns used to record their custom sounds. Whereas THIS addon, on the other hand, is for those who prefer their guns to sound like old black powder muskets from the dawn of the first firearms.

Installation instructions: Do not extract it to your interface/addons folder like most addons, or it won't work. Instead just extract it to your world of warcraft directory (where the launcher exe is found) if you have other sound addons installed, make sure you hit yes if windows asks to merge folders 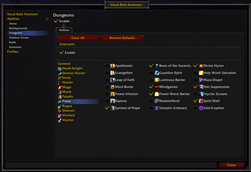