Get
Download BloodlustMusic (v1.1-2 release) for world of warcraft version 9.1.5? 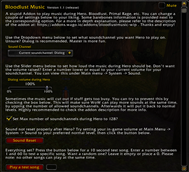 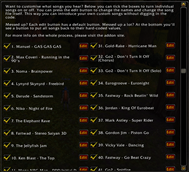 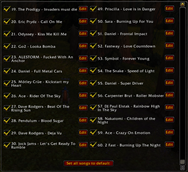 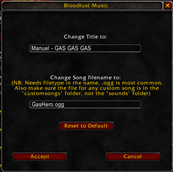 This is the addon version of my Weakaura “Bloodlust Music – Randomised” found here: https://wago.io/BkouYUJPQ

STORY AND PREAMBLE
Hello and welcome,

This is a stupid weakaura-turned-addon I made for friends and guildies that plays a random song each time hero or bloodlust (or any variation) is cast. Currently, the addon chooses the song based on the current local time (minute only). This is done so that everyone who has the addon will hear the same song as everyone else (provided they just use regular timezone settings). It will try to play the song this way at first, before falling back to generating a random number, and in turn a random song.

The weakaura version was inspired by “Bloodlust in 90s” by ButteryCrumb ( https://wago.io/By_2_vui- ) so go pay him some respects. After a while, me and the guildies got tired of the same song each time, so I got to work on creating a WA that would play a random songs instead of just “90s”. Currently, it’s evolved way past its initial scope and just does a lot more stuff now.

The songs last about 70 seconds each, to account for shamans with lego helmets and any changes blizzard might make to hero. In reality you’ll only hear 40 seconds of each song, or even less if the buff gets removed somehow.

A song won’t play if your sound is muted, or if another song is already playing. This prevents overlapping sound and some shenanigans in Torghast.

I chose snippets of songs I liked or thought were really hype and cut out the best part of each song. Finding songs that even fit decently and have a good part that lasts at least 40 seconds is quite hard. But I’ll take any suggestions you might throw at me. You can find the full list of songs at the bottom.Want to add your own songs, scroll down to the bottom for a detailed explanation of how you can do so.

NB: I don’t have an active sub and currently don’t play WoW. I can still work on the code, but please provide feedback and tips if anything goes wrong. I don’t plan on updating this very often, but I did want to release it anyway, instead of it just rotting away unfinished.

All that being said, enjoy!

SETTINGS AND OPTIONS
Visit the addon interface panel and click on BloodlustMusic for all settings and options related to this addon. Alternatively, you can type “/bloodlust” or “/blm” to visit the same page. Below is a detailed explanation of what every option and tidbit does. The panel in game also features explanations, but the ones featured on this page are more detailed

In the top-right corner of the panel, you’ll find a pretty self-explanatory mute button. If checked, songs will no longer play when you get a Bloodlust effect, or when you press the test button. Please note that if there is a song currently playing, that one will not immediately be muted when you check the box.

Here you can select your preferred soundchannel to play the music on. The options (as they appear in Main Menu -> System -> Sound) are Master, SFX, Music, Ambience and Dialog. You can basically pick any you’d like, but I recommend one that is either already high in volume, or one that you don’t mind being high. If you’re unsure, pick Dialog for the best results, or Master for more fun.

This slider allows you to set your preferred level of volume during a song. Say your Dialog volume is normally at 40%, this options can up it to a max of 100% if you’d like. After the song ends, it will put it back to your normal level (in this example, 40%). Don’t want anything changed? Just leave the option at 0%, and the addon will not mess with your sound volume.

This option is a bit complicated. Sometimes a song will cut off if things get a little too busy sound-wise. This has to do with the fact that WoW can only handle a certain number of sounds at the same time. If too many play at the same time, it will start pruning sounds at the bottom of the list, and the Bloodlust song might be one of them.

To remedy this, by choosing this option, the addon will attempt to up the maximum number of allowed soundchannels. Hopefully, this means that no song will cut off due to there not being enough “sounds” available at the same time. After Hero has ended, it will put the number of soundchannels allowed back to whatever level you had it at previously.

Please note, this option might cause performance issues on lower-end hardware as it can’t handle that many sounds playing. Use at your own risk

For more information about the subject, and more ways to remedy it, please check this link: https://www.mmo-champion.com/threads/2370808-Details-of-the-7-3-5-sound-issue-(from-DBM-lead-MysticalOS)

Because this addon was made by me, it might have some issues. In rare cases, the addon will not properly reset your sound levels whenever a song ends, is cancelled or you reload/logout. I should have fixed all the bugs relating to this issue, but one or two might have slipped through.

To fix this, go to your sound settings at Main Menu -> System -> Sound and set everything back to your preferred levels, then press this button afterwards. The addon will now save your inputs and sound levels for the next time a song is played.

Have everything set up in the options above? Great! Don’t have a bloodlust at hand to test it? Just press this button for a 10 second test of a song that would play at that minute. Alternatively, you can enter a number between 1 and 60 and hear a test version of the song at that value. This is great for quickly testing new songs you have added. Please note that by design, no other song can play while another song is already playing. Not by gaining a bloodlust effect, nor by pressing this button.

Ok, strap yourselves in for this one. If you dislike a certain song, you can press the checkbox next to its name and turn it off. The addon will skip over that song and select a random one instead.

Want to add your own songs? By pressing the edit button next to a song, you will be shown a window where you can enter your own custom name and file for a song you would like to add. Now, whenever the addon lands on that specific number, it will play your custom song, instead of the default one. There are some caveats to this:

Do you want a song back to default? Press the edit button next a song and press the default button, no need to enter anything in the input fields.

Messed up bigtime and want every song back to default in one go? Scroll to the bottom of the list and select to button to set all songs back to default. Please keep in mind that this cannot be reversed, and any changes you had made to any song will have to be entered manually again.

After every change you commit, the game will reload and you’ll be taken back to the addon interface page. (God I hope that explains everything)

Get Over Here Mage