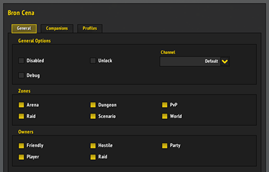 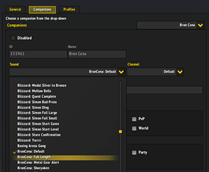 When a wild Bron appears, the John Cena theme tune will play.

You don’t have to be Kyrian to enjoy this add-on ! When someone near you summons Bron, the theme will play.

Bron’s friend the Kyrian Steward has joined the party! More companions to be supported soon.

/bron to open up the options.

You should be able to search for Bron Cena in your favourite WoW add-on manager.

Otherwise, the add-on is available directly from any of the following:

If you prefer the original Weak Aura, it’s here @ wago.io, though you’ll need to manually download and install the audio.

How can I make the sounds lounder?

Open up the Game Menu and go to System > Sound . In the Volume panel, you can adjust the Master Volume or each individual channel.

I don’t like the John Cena theme! How can I change which sounds I want for Bron or the other companions?

Open up the options and in the Companions tab, select your companion and then choose from the drop-down list of sounds, including those from other mods like BigWigs or DBM.

How do I add my own sounds?

Your sound should by in the .ogg format. You can put it somewhere under your WoW folder, but ideally place it under Interface/Addons/BronCena/Media/Sounds with the rest of the Bron Cena sounds.

Now, when you edit an existing companion or create a new one, you must choose <Custom> from the Sound drop-down, and enter the path to your sound file e.g. Interface/Addons/BronCena/Media/Sounds/MyCustomSound.ogg

Can you I suggest a sound or companion to support?

Sure, just log an issue and we’ll look into it!

Can I use Bron Cena’s sounds in my own weak auras or addons?

Sure. Bron Cena’s sounds get registered in the shared media library, so will show up in the sounds drop-downs in Weak Auras, Big Wigs, DBM and other add-ons.

Thanks to the gang at Immaterial for the inspiration! 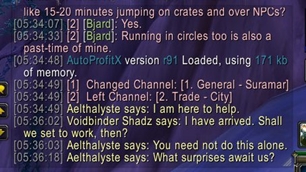 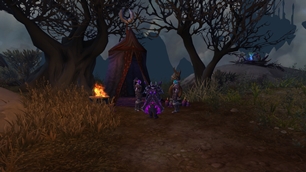