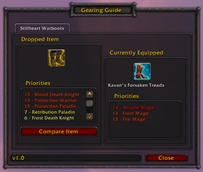 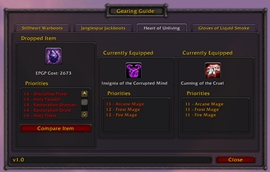 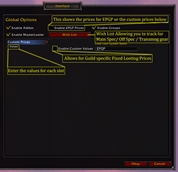 This addon will show the priority of the item based on the stats that item has. The priority is built upon ElitestJerks stat priorities for each class. out of the classes that can wear the item, the addon automatically sorts the list to show at the top which class is best suited to the item.

This addon can in turn help people in dungeons as well as raids, as it will show how good the item is for the players class and spec, also useful when gearing their offspec, no need to research websites to find out what items are best.

With the tooltips showing class specific information, even questing now can be made easier, see the item has priority? Then your class can wear that item, check out the number, if its a low number its not perfect but wearable, if it it higher than other pieces of gear, its really good for your spec!

This is a simple addon to give quick easy information, the addon will not be able to say what is perfect for your class and spec as you may be following different stat priorities. The addon does however show if the item is itemised for your class/spec, if you can wear the item, based on priorities and stat weights, the addon gives points per stat, so should help work out if one item is better than another if compared. This in turn shows items quickly easily and no one will go far wrong from having the items with high numbers.

This addon can show the EPGP costs of the looted item as per the WoWWiki Algorithm or via the Master Looters own custom values per slot.

Features:
– Updated for v6.0 – Warlords of Draenor
– Shows priorities on all Tooltips for the players class (Added in v1.3.3)
– Works for all levels and all classes throughout leveling, including classes than change armour types (Added in v1.3.3)
– Priority list of the classes sorted in order of who it would benefit the most
– Ability to compare the dropped item and the items the player is currently wearing and prioritise the items, showing which would be better
– Ability to show the priorites of an item specific to the players class on the tooltips, so they can compare items solo, questing, and finding random drops.
– EPGP Prices of the item thats dropped (Off by Default)
– The fixed prices can be customised in options, and the name can be set to any Looting System the guild uses.
– Ability to be shown/hidden in groups/LFR (default is set to Show)
– Ability to be shown in master looter groups/raids (default is set to Show)
– Ability to be only shown on items of a certain rarity (default is set to show green and above)
– Ability to be able to only show the priorities for the players class or all classes (Added in 1.3 – Default to only show players class)
– Added a Wish List, which the player can add items to (from the journal, auction house, dropped loot, etc) a list. When a item drops that the player has on thier wish list, the addon lets them know, and the reason they wanted it (main spec, off spec, or transmog)
– Recreated the way priorities are made, and should now be more accurate (v2.0) 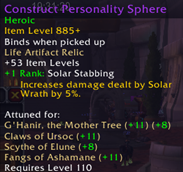