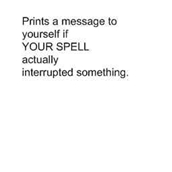 I Interrupted That
—-
/iit – prints help list
/iit info
/iit auto – Change output to auto. [Raid/Party/Self]
/iit say – Change output to say.
/iit self – Change output to print to self.
/iit toggle – Turns the addon on or off.
/iit verbose – Toggles verbose output.
/iit msg – Prints what the output message will look like.
/iit allmembers – Toggles announcement of interrupts from anyone in your party or raid
/iit party – Force output to party, even if in a raid. (ie instances where the raid is broken up into interrupt groups and there's no reason to have it broadcast to the raid, or your party is responsible for a specific interrupt)

Make you sad?
They make me , because they sit there and spam the stupid key, and it always says "Interrupted" regardless of if they actually interrupted. Maybe they missed the cast? Maybe their interrupt is on cooldown? Maybe they're a button- masher and spam it 50 times.

Direct them all here. It fixes the problem.
" How?!" You say? Well…
This little addon of mine watches your combat log silently, and whenever it reads a SPELL_INTERRUPT event [that fires whenever you interrupt someone's casting, with Counterspell, for example] it says the little message.
What could be better than that?
It says -what- you interrupted. Not only does it say it, it -links- it. Amazing. Pure awesome.
As a friend of mine said about something totally unrelated,
"Suck the Awesome Pipe and be made full of Win!"
That's right. Suck it. 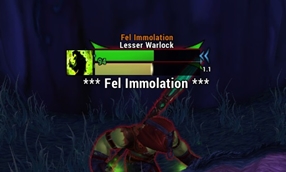 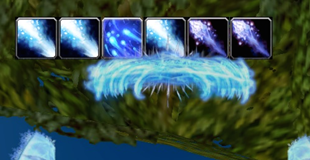