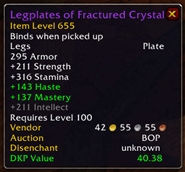 iDKP is fully independent, Ace3 based, written from scratch addon for calculating items DKP value based on item level and additional stats. The addon
was created specifically for the Warlords of Draenor expansion and as such all slots and statistics weights are based on the Blizzard's stats distribution for the expansion. At this point, I'm not planning to extend the addon to previous expansions.

How to use
Simply install the addon with the Curse downloader or manually extract it into the WoW addons folder. No additional libraries/mods are required.
After installing it, run WoW and activate the addon in the characater addon menu. After entering world, mouseover an inventory or equipped item and the DKP value would appear at the very bottom of the tooltip. The addon also supports the Auction UI, chat links and Mizus Raid Tracker.

DKP slot weights and other values can be changed in iDKP_Vars.lua file, though I strongly recommend leaving this file untouched as these are balanced for the WoD expansion.

If you send me the localized files then I'll update the addon and add you to the contributors list. 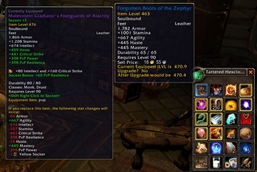