I made this as a continuation upon DerangementMinimapBlips, but to my own preference. It shrinks down friendly NPC/Player targets for minimap icons on purpose because I find them to be a much lower priority. This distinguishes them from enemy targets better, allowing you to more easily sift through many enemies that may be clustered in an area. This is especially useful for hunters, where Track Humanoids in particular can make the minimap so cluttered that you might as well otherwise disable it. Because it’s a texture replacement addon, it should be compatible with every other addon with exception to another texture replacement addon like aforementioned DerangementMinimapBlips. Like the previous addon, it also makes gathering nodes into a silver colour to distinguish from neutral players/NPCs. Unlike the previous addon, I’ve actually switched the icon for player / NPCs so that player icons have a gold ring around them. I felt this gives a better indication that player characters are unique.

In case I forget to update and it becomes utterly unplayable, you can update and then /reload like other addons as of Shadowlands. There are two methods to disable: disable the addon and relog onto the character (/reload won’t suffice to switch the texture back to ingame default) or do /kmidisable, disable the addon, and do /reload.

/kmidisable doesn’t permanently disable the addon, it just temporarily sets the texture back to the default one for that session so you can disable the addon and do /reload. You can re-enable by doing /kmienable.

Blizz changes the texture very often with each patch. The texture is located in:

Anyone can redistribute and modify the addon however they like, I’m just lazy with license understanding.

Burning Crusade Classic is still limited to only tracking one type of thing at a time. You can’t distinguish friendlies from enemies. You can’t distinguish players from NPCs. I may try to make an improvement on this blip, maybe reduce the size or make it semi-transparent or something, but for now these are the limitations I’m set with by Blizzard. I still made gathering (herb/mining) nodes blue though at least. 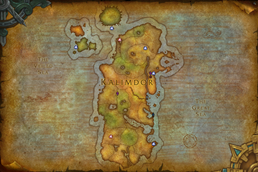 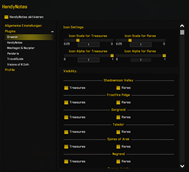