The games Key Binding UI will contain a section for Pokedex. The only two commands you’ll probably want or need to keybind are Toggle Mount and Summon Companion. SummonOtherMount is a useful bind for those times when you don’t want the type of mount we selected (for example, we choose a swimming mount but you want a regular one). Pokedex configuration can be reached through the games addons menu or by typing /pd. The full list of commands can be found at http://www.wowace.com/addons/pokedex/pages/main/actions/.

The chance of a particular item (mount, companion or title) being selected is equal to the rank you have assigned to it divided by the total of the ranks for all other eligible items. Put another way, each point of ranking is one ticket to the raffle drawing to see which mount is selected. If all items are still set to the default value, then they all have an equal chance of being selected. An item which you have assigned a value of 0 will never be selected.

Pokedex has support for all the normal ace3 profile stuff (change current, copy, etc), with a couple of twists so that you can have the benefits of sharing a profile and still be able to make character specific tweaks by overriding the rank value on that character. See http:www.wowace.com/addons/pokedex/pages/profiles/ for more info.

The New Hotness – The idea behind this feature is that your most recently acquired pet/mount/title is something you’re probably excited about and what to see more often than the rest of your collection. Or maybe you want to flaunt it in front of the all the people who are still trying to get, for example, their Sinister Squashling. When dealing with large numbers of pets or mounts, even setting it to the max rank will not cause it to show up very often. So rather than make you downrank every other item, the hotness feature acts as a way to get that one pet or mount out more often. If there is a hot pet, we’ll first do a percentile roll against the heat of hot item. If the heat is set to 50, then 50 percent of the time we would summon that hot pet. The other 50 percent of the time, we’ll do the usual random selection out of the weighted pet pool.

Safe Dismount – This feature is disabled by default but can be turned on in Pokedex’s options ui. This feature allows you to keep as a default behavior that of having the Auto Dismount in Flight option turned off, so that accidently trying to cast a spell in flight won’t send you plummeting to your death, but allows you to choose override scenarios where you do want actions to dismount you automatically so that they can be executed. The scenarios you can opt into are 1) when you are in combat, 2) targeting something attackable or 3) attempting to gather a resource via mining, herbalism or skinning.

Random Titles – You can also rank titles the way you do pets and mounts and have Pokedex periodically change your title.

Auto summon pet – You can have Pokedex summon a non-combat pet, if you don’t already have one out, every time you dismount or change zone.

autocast Water Walking when mounting – An option exists (off by default) for Shamans to cast Water Walking and Affliction Warlocks to cast a Soulburned Unending Breath as they summon a mount with the Toggle Mount command. This way the buff is already in place when they encounter water so they don’t have to dismount, buff and then remount (all while wondering why Death Knights get to cast Path of Frost while mounted).

mountoff – mount up on the same mount as your target 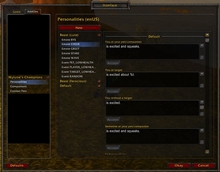