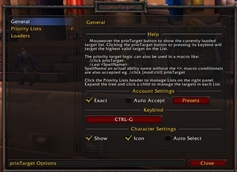 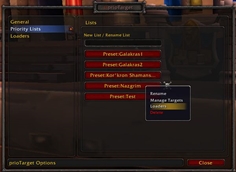 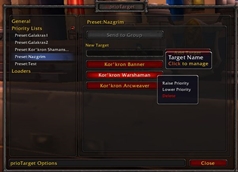 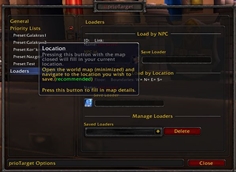 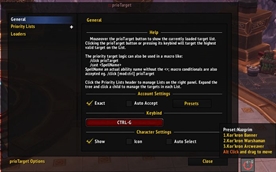 How does it work? What does it do?

prioTarget can hold a list of targets ordered in priority from most important to least important.
Once such a list is loaded you can use it to target switch very easily.
It is mainly intended as a damage dealer assistant on fights with complex dps priority requirements.

When first extracted in your AddOns folder and after logging into the game prioTarget will put a floating button with a cross-hair graphic on your screen.
Alt click and drag it wherever you want to place it, it will save its new spot.
You can also choose to hide it completely from the addon options and use its keybind or macro functionality.

Once a suitable priority list is loaded, interacting with the button will target the highest priority target that is alive, and move on to the next once it's dead.
You can interact with the button in one of three ways (or a combination)

How do I load lists to it? How do I configure it?

prioTarget comes with some preset example lists but its greatest power is the ability to create your own target lists and as a group leader even share them with other group members that have the addon.
At present the player needs to load one of the preset priority lists to the button from the addon options or accept a priority list sent by the Group Leader.
Advanced users can also create auto-load conditions and link them to Priority Lists to have the addon try auto-load them.

You can bring up the options in one of two ways.

Once you do, an option screen like this will appear.

The tree control on the left allows navigation of the various option panels, the right panel shows details for each section.
<Auto Accept> controls whether any priority lists sent by the group leader are accepted automatically or need you to respond to a confirmation popup.
<Auto Select> controls whether the addon will try to automatically load priority lists for which there are loaders.

The good stuff comes when you click the <Priority Lists> heading on the left panel.

Now you can see what priority lists are available and which one is currently loaded on the targeting button, marked with the jolly roger (skull and bones).
Left click any list to load the associated targets on the prioTarget button.
Typing a list name into the <New List / Rename List> lets you create a new empty list.

How do I change target priorities for an existing list or add targets to an empty one I just created?

Expanding <Priority Lists> at the left panel or right-clicking a priority list button and selecting <Manage Targets> from the menu will allow you to navigate to a specific target list on the left panel.
Once there the right panel will show the targets included in the list ordered from highest priority (top) to lowest (bottom).

Clicking one of the target name buttons allows you to raise or lower its priority or even remove it.
The <New Target> input field is where you can type a new enemy name and press <Enter> to add it to the list of targets.
Alternatively if you are able to target the enemy, you can press the <Add Target> button which will fill in the name ready for storing on the list.
This is also how you would add targets to a new empty List you just created.

Advanced; Managing Loaders and linking Priority Lists to them.

Selecting the <Loaders> from the left panel shows on the right the interface where you can manage existing loaders and add new ones.
There are two types of Loaders: NPC and Location.

Note: The <Auto Select> general option needs to be active for the addon to even test conditions for auto-loading.

This is the first public release, addon has had only internal/guild use so far hence the lack of localization options (maybe in the future). 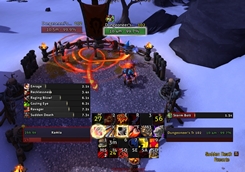 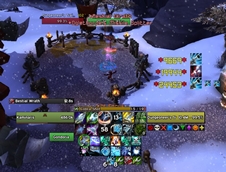 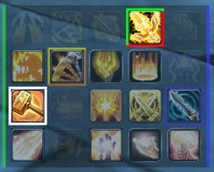 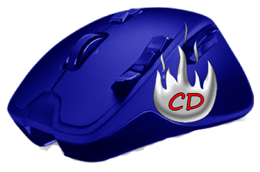