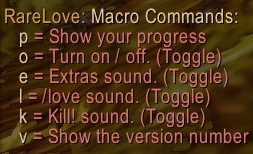 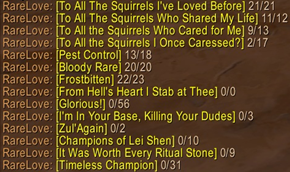 One Macro to target the NPCs and Critters required for the four "/love" achievements, the Bloody Rare, Frostbitten, Glorious!, Pest Control achievements, Cataclysm rares such as Jadefang and Burgy Blackheart, early MoP rares and achievements such as G'nathus and Zul'Again and a few others such as the Time-Lost Proto-Drake and Lil Timmy.

The first time you run this AddOn a macro for your character will be created. Drag the macro icon to a hot bar. Every time you click that button, the AddOn will be executed. A sound will be heard upon a "hit" and for the "Squirrel" achievements your criteria count will be displayed in chat.

There are three separate and configurable sounds, categorised as "love" for the four "Squirrel" achievements, "kill" for all killing achievements, and "extras".

✅ Northrend Frostbitten
✅ Outland Bloody Rare
✅ Mists of Pandaria Glorious!, I'm In Your Base, Killing Your Dudes, and Zul'Again, Champions of Lei Shen, It Was Worth Every Ritual Stone, and Timeless Champion

To prevent botting, Blizzard prevents auto-targetting. It is impossible to deselect a target. The AddOn is smart and knows if the macro found a hunter pet. It simply waits for you to manually deselect.

A few non-achievement mobs drop one-off toys, pets or mounts. It is a programming limitation that I cannot reliably test for ownership/learning of these unless you have recently opened your Toy / Mount / Pet Journals. Yes, I could build and retain a list over time. That's taking the AddOn in another direction.

Tracking of Pest Control requires a little sleight of hand. I trigger a progress report after 20s of the last macro key press, enough time to kill the critter surely!

The Achievement API calls are arguably the most expensive cpu/fps wastes. I have employed extensive throttling of calls throughout. I spread the initial setup over 10-20s at login. A '/rare p' progress command will take about 20s to return as it slowly compiles its data. I wait a full second after a '/love' before requesting data as the Blizzard servers themselves are somewhat slow to update! A full 60s elapses between completing and rescanning achievements.

Nobody can resist an adorable Raptor Hatchling pet or the magnificent Netherwing Drake and Long-Forgotten Hippogryph mounts. You'll of course need Dark Soil for The Tillers friendships and a Loose Pebble for your Dog! While fishing you'll wonder if This Scampi Happening? Oh, but it is! Why not Let Minnow about your fishing poles and you surely Cod Do Batter with your fishing achievements. While adventuring, map your way with X and Y coordinates and always go the Hard Yards measuring distance. Have some fun with Yarrr for pirate Tooltips or turn geek with Fibonacci. See all the hidden game asset IDs with Tip or Enumerate your frames. Achievement critters and NPCs receive some Rare Love and keep track of Sunrise & Sunset.

It is all about the cookies and beer although, and don't let Gallywix know about this, a "thank you" in the comments section fuels my programming appetite and is very much appreciated. And then, you could cut straight to Donate because as Gallywix would say… "time is money, friend". 😊 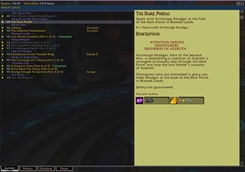 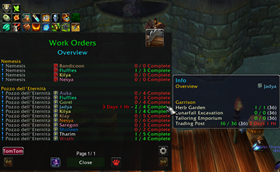 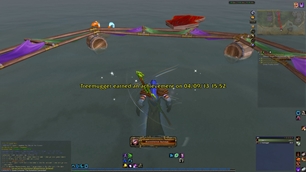 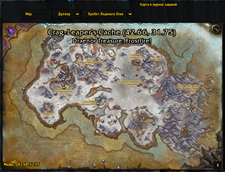 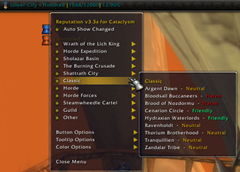