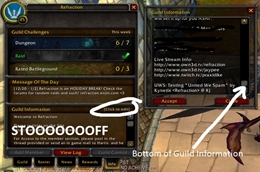 NOTE – Will be coming back to WoW (and rebooting this project) when WoD hits 🙂 See you there!

An intelligent way of promoting your guild in Trade Chat without the drawbacks of having to co-ordinate who's afk in SW/ORG spamming trade chat.

Instead of your average spam bot, this addon actively takes a roster of who's in a major city from your guild and every 90 seconds, one person will print out the designated message into Trade Channel. There is no need to coordinate who's afk spamming in Trade or to have anyone sitting in SW at all. A plus is that this addon takes a whopping 17kb of memory (that's sarcasm :P)

Hardly any configuration is needed for this addon:

If you type /uws message, United We Spam will give you a confirmation on what your message will appear like:

Step3: Walk into a major city 🙂

Other commands for United We Spam just include /uws on and /uws off for turning on and off the addon. Also /uws timer (NUMBEROFSECONDS) changes how often UWS spams. EX: /uws timer 120 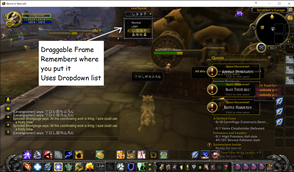