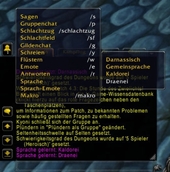 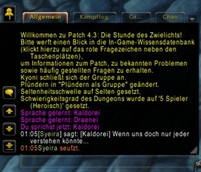 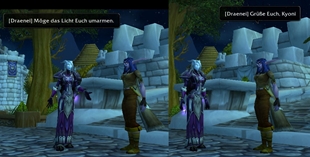 FairLanguage is an addon designed to bring more fairness to role-playing communication and less confusion to guilds, instance groups and raids.
It simply circumvents the use of race specific language, instead sending every message in clear text, placing the language tag of the selected language up front.
For role-players this enables you to tell players, which language you are speaking, while still giving them the chance to understand what you are saying and leaving it up to them if their character is able to understand you.
For everyone else the addon prevents accidents like [Darnassian] raid warnings, guild chat messages or encounter explanations.

What you CAN'T do with FairLanguage:

What you CAN do with FairLanguage:

Technical details and constraints in the current version:

You can control your language through Blizzard's chat language menu found at the speech bubble on the left side of your chat window, where your own, learned languages will be listed.
For easy switching between the languages you can set keyboard shortcuts

Of course, FairLanguage remembers which languages you have learned and what language has been last spoken.

FairLanguage doesn't provide additional interface elements but it makes use of Blizzard's chat language menu. You can find it on the left side of your chat window, it is the button with a speech bubble on it. In the chat language menu you can find your standard Blizzard languages and your own learned ones.

How to use – the chat commands

/flc on
activates FairLanguage, the replacement of the chat and reloads all previously learned custom languages into the language menu.

/flc off
deactivates FairLanguage, the language menu is reset to Blizzard's default and the native language texts are send cryptic for non-native speakers. You're settings will be saved and can be restored if you activate FairLanguage again.

/flc toggle
alters between the common language without any tag and the active/previous foreign language.
This command can be bound to a key.

/flc ?
shows the currently spoken language, if you ever happen to forget what you are speaking.
This command can be bound to a key.

/flc cycle
allows you to cycle through your languages in the chat language menu. Also works if you have only Blizzard's default langauges set.
This command can be bound to a key.

/flc setlanguage language
sets the given language as active language. This is only temporary and can be overwritten with other. Doesn't appear in the chat language menu.

/flc learn language
makes you learn a language. This language will appear in the chat language menu for easy access.

/flc unlearn language
has you forget a language. This language will disappear from the chat language menu.

/flc unlearnall
clears your language memory completely. Only the Blizzard languages will remain.

you learn to speak Darnassian. It will appear in the chat language menu for easy access.

With an macro you can set specific languages like

Using it will set your spoken language to Gnomish Binary.

and with the macro

Your character can swith between your last spoken foreign language (i.e. Gnomish Binary like above) and your common language, even if he usually doesn't have a second language.
Human Mage: [Gnomish Binary] This language might be a little bit to theoretical for me…

Further debug and advanced commands are listed in the file "FairLanguage-desc.txt".