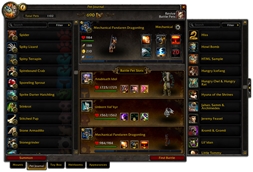 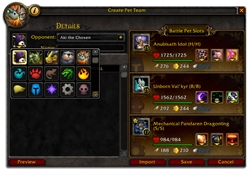 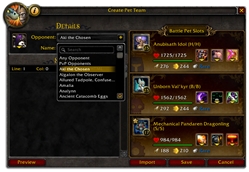 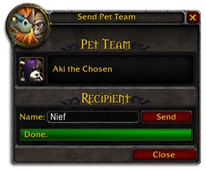 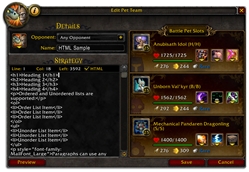 The ‘Send To…’ feature, which allows you to send pet teams to other players on the same or a connected server, hasn’t been extensively tested due to an inability to run 2 accounts simultaneously. If you do experience any issues, please let me know but it may take some time to resolve them.

Niggles: Pet Teams is (currently) a standalone AddOn that adds the ability to create an unlimited number of Battle Pet Teams. Once created, the pet teams can be edited, loaded and exported. The list of pet teams is displayed as part of the standard Blizzard Pet Journal.

You can create as many pet teams as you like, useful given that the number of pet tamers is now well over 100. A pet team consists of the following:

The pet team list is where all the pet teams you have created are displayed. Each pet team will be listed with its icon, name and/or opponent. If you double-click on a pet team, it will be loaded. If you shift-click on a pet team, it will be edited. Right-clicking on a pet team will display a menu with other options. The pet teams in the list can be filtered by entering text in the ‘Search’ field. Depending on what filter options are selected, the pet team’s name, opponents and/or pets will be search for matches. This means you could enter ‘Idol’ and those pet teams that include the ‘Anubisath Idol’ would be listed. You can also filter on the type of opponent and which continent the pet team’s opponent is on.

Up to 8 categories can be named in the ‘Interface/AddOns’ panel for the AddOn. Once categories have been named, they can be assigned to pet teams and then used to filter the pet teams. If a pet team has a category, its icon is displayed in the top left corner of the pet team’s icon.

The player that received the pet team will be notified by a whisper-style message in the chat box. The message will contain a link that can be clicked. That will open the ‘Create Pet Team’ panel where the pet team can be reviewed and either saved or discarded. The last 64 pet teams received are stored, with any older ones being discarded. The pet teams received are not saved across game sessions or reloads, so should be processed in a timely manner.

Once you have created a pet team, you can right-click on it and select ‘Export’. This will display a panel where you can copy text containing the encoded pet team. It can then be pasted wherever you want. All the information for the pet team is encoded, including the strategy. This means the size of the encoded pet team will vary wildly. You must copy all of the text, including the ‘{‘ and ‘}’ at each end. You must not change the encoded pet team in any way, otherwise it won’t import. The pet team is mostly base64url encoded, with a header to hold version and checksum information. This should allow for safe copying and pasting to places such as forums, emails etc.

PetBattle Teams and PetBattleMaster are popular, long-established alternatives to this AddOn, but they lack some of its features. To allow users that wish to migrate to this AddOn an easier transition, it adds extra options to the right-click menu for pet teams in these AddOns. You can choose to export an individual team or all the pet teams. Pet teams will be exported even if they have already been exported. To help easily identify them, pet teams exported to this AddOn will have their names prefixed with ‘PBT:’ for PetBattle Teams and ‘PBM:’ for PetBattleMaster. Pet teams can’t be exported from PetBattle Teams if they contain any missing pets, such as released or caged pets. This is because PetBattle Teams doesn’t record enough information to correctly identify their breed.

If a pet that is part of a pet team is caged or released, the pet team’s name will be displayed in red in the pet team list, to indicate it’s incomplete. When you edit the pet team, the missing pet will be highlighted in red. In the bottom right corner of the battle pet slot will be a warning symbol. If you click on the symbol, the AddOn will try to find a replacement pet. If it can find an exact match, that pet will be loaded into the slot. If an exact match can’t be found, a list of those pets that are a close match will be displayed for you to select a replacement. The AddOn includes a concept called ‘genus’. This means that if, for example, you are missing a moth in a pet team, another species of moth with exactly the same abilities will be listed as a possible replacement. When you import a pet team, using the ‘Import’ button on the ‘Create Pet Team’ panel, all the pets in the imported team will be checked against your pets. Those pets with an exact replacement will be immediately changed. Any pets without exact replacements should be dealt with as if you had caged or released the pet.

If you go to a pet tamer, target them and then open the Pet Journal, the pet teams will automatically be filtered on that pet tamer. You can then load the pet team you want to use against that pet tamer. When you start the pet battle, if the AddOn can correctly identify the pet team and opponent, it will automatically display the strategy for the pet team. If for some reason the correct strategy can’t be identified, you can click the AddOn’s micro button in the Micro Button Bar. This will display the strategy panel with a drop down for you to select the correct strategy.

The strategy for a pet team can entered in plain text, in which case what you enter will be simply displayed in the strategy panel. However, if the ‘HTML’ checkbox is ticked then you can enter the strategy in HTML, using a (very) limited subset of standard tags. Due to limitations and/or restrictions in the SimpleHTML and Blizzard Help browser, this AddOn includes its own HTML support. This does mean there are some restrictions on what it can do. Italics, underline and true bold for example would require new fonts. It will never be able to display HTML pages from the internet. But it does allow the strategy to be neatly formatted and displayed.

All HTML tags used must be closed, including ‘<p></p>’ and ‘<br/>’. The following tags are currently supported:

More tags may be added at a future date. All tags can have attributes specified for them, but currently only the ‘style’ attribute will do anything. The following styles will be recognised:

Only ‘color’ will be honoured for inline elements such as ‘<span>’. 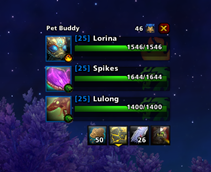